Recently one morning on Facebook they had one of those quizzes where they listed about 50 places and then asked how many you had been to and people were saying 11, 15 etc and I don’t pay much attention to these because they then tailor ads to you based on your answers and I feel they know enough about me as it is.  But it did get me wondering, so I added up the places mentioned and I had been to 30 of them which I didn’t think was that bad (I didn’t put this answer down however).  This of course led me to wonder how many places I haven’t been to and would like to go which eventually led to me trying to figure out how many countries and continents there were in the world.  I’m sure your day starts the same way, right?

You don’t have to google this as I will provide the necessary facts.

There are seven continents:  North America, South America, Asia, Australia, Europe, Africa and Antartica though there is debate on whether Europe and Asia should be listed as one (Eurasia) as it is one large land mass.  There are also proponents of Oceania and New Zealand (Zelandia) but generally speaking just the seven.  Naturally, I was curious to see how many countries there were and unexpectedly opened a can of worms here!

For instance, my husband is from Scotland and they have been trying to become independent for centuries, the same applies to Ireland but they are not really countries but part of the U.K.  Taiwan, Tibet and Kosovo are similarly independent but tied to a sovereign country and not recognized by the UN – Greenland is not a country but a part of Denmark – who knew?  Geography is fascinating for me now but when I was in school I used to think what’s the point of studying this when I likely won’t ever leave Canada.  How wrong I was!

Below is a list of other places that lots of people consider countries but all belong to an actual sovereign member state.

To keep things simple though, you can generally say there are about 200 countries (including territories) in the world depending upon your source of information.

According to the UN there are 195 but the chart below shows other governing bodies with different criteria.   To see full explanations please click on link below
Countries in the World 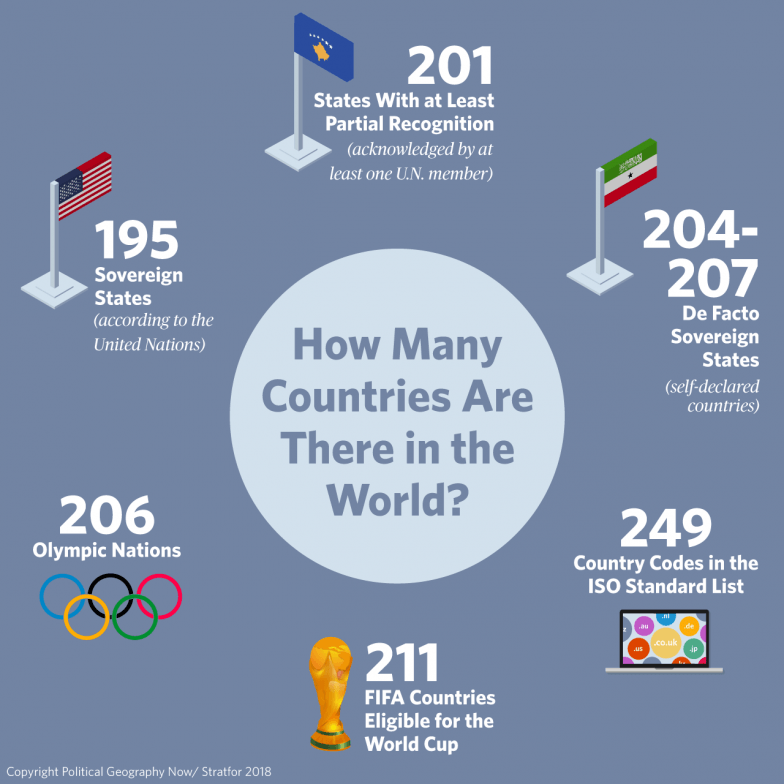 After pondering on this for awhile, I realized I haven’t really been anywhere in the larger scheme of things but I intend to keep on travelling as long as I’m able and discovering the beauty, culture and peoples of other places different from myself in order to gain a better understanding of them and me.  If you are lucky in life you never stop growing or being curious.  As much as I may dislike change ( I prefer being comfortable and safe), it is ultimately more rewarding to take risks and embrace change.  I think that now I would get far better grades in Geography than I did in school.  To those who love travel – Happy Trails!  Good luck on working your way through this list!